This profile of Sierra Leone’s Refugee All Stars is the eleventh entry in our new Artist Profile series, intended to introduce each contributing musician featured on the Wan Fambul/One Family benefit album. This compilation is available for a donation, with all proceeds going to the groundbreaking grassroots peacebuilding efforts of Fambul Tok in Sierra Leone.  Take a look at last week’s post on Mashrou’ Leila, and be sure to keep an eye out for our next profile, Dengue Fever! 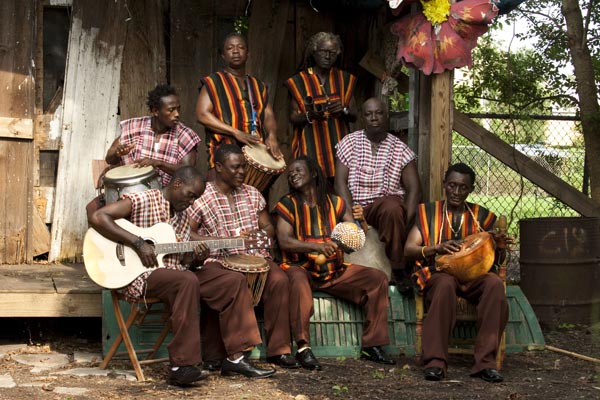 As they languished in a squalid refugee camp in Guinea during the brutal civil war in Sierra Leone of the 1990s, the members of Sierra Leone’s Refugee All Stars, could not have imagined what the future would hold for them. In just five whirlwind years, the group has been the subject of an acclaimed documentary film, toured the world to support a critically revered album, appeared on the Oprah Winfrey Show, had their music featured in a major Leonardo DiCaprio film, and shared the stage and studio with Aerosmith, Keith Richards and other international stars. SLRAS have risen like a phoenix out of the ashes of war and have captivated fans across the globe with their uplifting songs and pure energy live shows. The band is a tangible example of the redeeming power of music and the ability of the human spirit to persevere through unimaginable hardship and emerge with optimism intact.

In the mid 1990s, band-leader Reuben Koroma and his wife Grace found themselves in the Kalia refugee camp near the border with Sierra Leone, and joined up with Francis John Langba (aka Franco), another musician in the camp, to entertain their fellow refugees. Even the refugee camps were not safe havens, however, as they were attacked by the Guinean military and civilian militias who believed the camps were being used as staging ground for cross border attacks by the Sierra Leonean rebels. Eventually, Reuben, Grace and Franco ended up in the more stable Sembakounya Refugee Camp, and there they put the call out for musicians to audition to form a band. After a Canadian relief agency donated two beat up electric guitars, a single microphone and a meager sound system, Sierra Leone’s Refugee All Stars were born.  The next three years saw the fledgling band being relocated from camp to camp, bringing much needed joy to fellow refugees with their heartfelt performances (The award winning eponymous documentary film chronicles this period).

The war in Sierra Leone came to an end in 2001, and over time the All Stars returned to Freetown, where they met other returning musicians who eventually joined the band’s rotating membership. It was there in the tin-roofed shacks of Freetown’s ghettos that SLRAS recorded tracks that ended up, along with unplugged recordings made in the refugee camps, being the basis for their debut album, Living Like a Refugee, which was released on Anti-Records in 2006.

Despite their success, back home in Sierra Leone it was becoming clear that even though the war was over, there were still difficult challenges to overcome the world’s third poorest country – this has only strengthened the resolve SLRAS to do what they can to turn their country around. Their weapon in this struggle is music, and their message, while offering critique and condemnation of wrongdoing, remains positive and hopeful. Optimism in the face of obstacles, and the eternal hope for a better future motivates their lives and music.

“It’s been a long struggle out of the war, out of miserable conditions,” notes Koroma, “So now we are trying to develop ourselves as a band and be based in our country. We are really moving towards finding ways of elevating ourselves somehow. But we do not just think about ourselves alone, we try to bring out sensitive issues that are affecting the world. It is all of our responsibility that the masses are suffering. We bring our positive messages into the world so we can expect a positive change in the world. And, most importantly, bring about peace.”

Their sophomore album “Rise & Shine” displays how much SLRAS have grown since their early days jamming around campfires in isolated refugee camps. The title of the album reflects the band’s desire to remain positive in the face of struggle, always greeting a new day with a spirit of excitement over what the future holds.  Their third album, Radio Salone, will be released in spring of 2012.

To learn more about SLRAS, visit their webpage.