This profile of Mashrou’ Leila is the tenth entry in our new Artist Profile series, intended to introduce each contributing musician featured on the Wan Fambul/One Family benefit album. This compilation is available for a donation, with all proceeds going to the groundbreaking grassroots peacebuilding efforts of Fambul Tok in Sierra Leone.  Take a look at Tuesday’s post on Bhi Bhiman, and be sure to keep an eye out for our next profile, Sierra Leone’s Refugee All Stars! 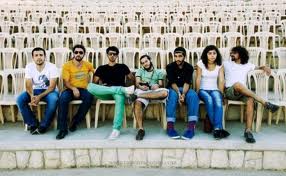 Formed in 2008, Mashrou’ Leila (Arabic: مشروع ليلى‎ sometimes transliterated as “Mashrou3 Leila”, meaning “night project”) has quickly emerged as one of the most exciting, original and successful bands in Lebanon today – if not all of the Middle East.  The group began without any preconceived expectations when American University of Beirut students Haig Papazian (violin) and Omaya Malaeb (keyboards) posted an open invitation to musicians, looking to jam.  The group’s lineup was solidified with the addition of guitarists Firas Abou Fakher and Andre Chedid, bassist Ibrahim Badr, drummer Carl Gerges, and vocalist Hamed Sinno.  The overnight jam sessions (from which the group got its name) served as an outlet for the musicians to vent the stress of college and the unstable Lebanese political situation.

Mashrou’ Leila has taken an active role in promoting causes through their live performances.  For example, in December 2010 to commemorate World Aids Day the band played at a sold-out benefit concert that raised over $20,000 for the HIV/AIDS fund at AUB-Medical Center Out Patient Department.

The band members were all born during the end of the brutal Lebanese Civil War and therefore it is hard for them to fully grasp how the civil war has affected Lebanon.  In regard to the current state of the country, the band explains: “While the civil war has had a tremendous impact on the economy, the damage is secondary when compared to the effect it has had on the average Lebanese citizen’s way of thinking. The civil war has left most of the Lebanese extremely wary of fellow citizens from other sects/political groups. On the other hand, the country remains notorious for it’s party scene, night life and tourist destinations, a somewhat hypocritical curiosity that serves as a testimony to the population’s yearn for life and happiness.”

Mashrou’ Leila sees their music as a first step in helping to unify the divisions caused by the war and the subsequent “decades of turmoil.”  They feel most of Lebanese society’s problems are due to their way of thinking and they hope that “simply bringing some of these issues up will force people to come to terms with the problem.” So far their message seems to be getting across.  The band proudly declared: “fans are identifying with the situations we describe, the images our lyrics create – and for the first time, they feel that there’s something within their culture that represents them, and their thoughts.” However, at the same time Mashrou’ Leila is confronted with conservative people that are “bothered by the honesty of our words – and would like to keep these issues not discussed.”  This “silent treatment” is similar to how they feel the Lebanese media refuses to address certain issues. “We swear in some songs, we sing about intimate sexual details, we talk about unconventional love – people need to come to terms with the real world – it’s not perfect.”

When asked what they thought was important for audiences outside Lebanon to understand they explained: “While people living in North America might be familiar with Lebanon’s political problems, it is important to keep in mind the Lebanese people’s diversity in terms of both lifestyle and way of thinking.”

To learn more about Mashrou’ Leila, visit their webpage.