Since Fambul Tok kicked off its community reconciliation process in Sierra Leone, several clarion calls have been made on government by various people, including traditional leaders, to declare March 23 of every year a day of national reflection. Held on the anniversary of the start of the war, March 23rd, if  recognized by government, would encourage every Sierra Leonean to sit back and reflect on what happened during the country’s decade-long conflict and how everyone must work to ensure such a virulent war does not reoccur.

For the past few years, Fambul Tok has organized various events on March 23 in communities across Sierra Leone. In one such program orchestrated by Fambul Tok, student peacemakers added their voice to this year’s commemoration of March 23rd, calling on the Government of Sierra Leone to declare the day a national day of reflection day, not simply a public holiday. 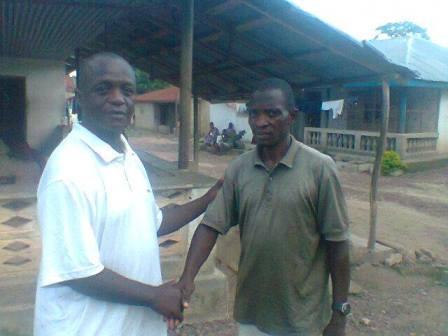 On Friday, May 23rd, 2014, traditional leaders in Dangbaidu section, Sandor chiefdom, Kono district declared May 23rd  “Fambul Tok Day.” Prior to the declaration, the Tefeya Junior Secondary School prepared to host a quiz and oral history night (bonfire) for the student peacemakers. When the Section Chief and other traditional leaders heard about the proposed event, Chief Sahr Rodney Morsay appealed to teacher peace-coordinators and Fambul Tok staff members for the events to be held in an open place so the entire community could partake. After consultations with others, it was declared that all parents, guardians, and community members spend the day in Tefeya, not only to honor that day, but also participate in the events one way or the other.

After the quiz competition, the community stakeholders who attended said they were so impressed with the kids and emphasized that it was the very first time they had witnessed such an educative forum.

In the night during the oral history, stakeholders informed students how the war started, how it escalated, and how it ended. Questions were posed and students were cautioned not to be involved in violence, but instead help in the peacebuilding and reconciliation process in the country.

After the event, Town chief of Tefeya, Komba Kassadeh urged elders and community members to stay and witness what he referred to as, “their own bon fire.” He called on everyone who had hurt his or her fellow community member to apologize in the spirit of reconciliation.

First to testify was Sahr Komba Mani, a strong supporter of Kai Ansumana Babonjo, who contested with Kassadeh for the town chieftaincy election Tefeya. Sahr told the gathering that he had problem with chief Kassadeh during the electioneering process. On behalf of Babonjo, who was absent, Sahr asked for forgiveness for all that he did to chief Kassadeh.

In his remarks, Chief Kassadeh accepted the apology and said his then opponent was his brother and now that the electioneering process was over, they should put all hands on deck to work together. He called on anyone he had hurt during the discharge of his duties to have mercy on him. Sahr and Kassadeh, who were now on good terms, embraced each other.

Other members who had wronged each other used the occasion to reconcile.

Upon Babonjo’s arrival, he was informed about the reconciliation process that occured during his absence. Without wasting time, he visited Chief Kassadeh and dined with him that morning.