Today the Wan Fambul Peace Clubs in 15 Schools in Kailahun, Pujehun, Moyamba and Koinadugu districts are engaging communities in their localities to flag issues of the history of the war and lessons learnt that could move the nation ahead and prevent a recurrence of the war! Executive Director John Caulker said the Never Again Campaign would last for a year to enable the pupils and citizenry to get a deeper understanding of the origin and effects of the war as we move towards elections.

John Caulker said, “The TRC (Truth and Reconciliation Commission) report revealed that among the causes of the war were bad governance, corruption and greed, human rights violations, exclusion, marginalization of youth and women. To date these marginalized and deprived youths have become fertile recruitment ground for fomenting various forms of violence. We want the government and stakeholders to reverse this trend.”

He called on the Ministry of Basic and Senior Secondary Education to add the teaching of the history of the civil war in the schools curriculum.

The Wan Fambul Peace Programme aims to train school children and youths to become good role model and peace ambassadors in their communities.

The Sierra Leone Civil War (1991–2002) began on 23 March 1991 with the first gunshot in Bomaru when the Revolutionary United Front (RUF), with support from the special forces of Charles Taylor’s National Patriotic Front of Liberia (NPFL), intervened in Sierra Leone in an attempt to overthrow the Joseph Momoh.

During the conflict over 50,000 people were killed, many amputated and two-thirds of the 4 million population was displaced. Today we still carry memories of widespread amputations and atrocities against defenseless children and women. It took the international community (ECOWAS, AU and UN) lives, time and huge resources to disarm, demobilize and reintegrate over 100, 000 combatants to bring peace to the forlorn state.

Buildings and properties worth millions of dollars were razed to the ground. The UN and donor partners had to rebuild the state afresh. The UN set up the TRC and Special court as mechanisms to ensure that such massive atrocities and violations of rights never happened again. 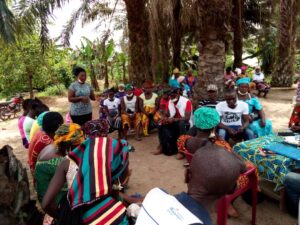 The Bulima section CWMC executive, since its formation in July 2020, has succeeded in creating smaller FT groups in all 15 villages in the section.

While giving updates of the group’s activities over the period, Amos Charles, the Financial Secretary informed Fambul Tok that they decided to create groups in all villages in order to enable individual villages to work towards their respective needs in terms of development in the chiefdom. He went on to say that their membership has now reached 82 (36 Males and 46 Females); adding that they now have in their account the sum of Le 7,930,000 which they use to give out soft loans to their members and also for developmental activities in the section. Amos also informed Fambul Tok about some of the successful community mediation efforts embarked on in communities that have resulted in relative peace in the section over the years.

FT observed that each member contributes the sum of Le 10,000, plus Le 2,000 and a cup of rice for refreshment during each monthly meeting. Amos informed the our team that, “the group is divided into two and for each month a total of 41 people will benefit from a soft loan to the tune of Le 160,000 for which one will pay back the sum of Le 175,000 in return, which includes an interest of Le15,000”.

Lucia Brima, district team leader, encouraged the group to keep up the good work and said: “ you are not doing it just for the sake of Fambul Tok but for the interest of your communities and the section as a whole”. She went on to say that FT will always be there to provide the space for community development. The group intends to meet again on the 15th April in Lukono community.

The ceremony started with individual silent prayers followed by self-introduction. Mr. Mohamed Koroma one of the peace club coordinators, said in his opening remarks that “Fambul Tok and the peace club are not something new to the school, because they were working with the school before the Ebola outbreak in 2013 and the school befitted a lot from the program. St Steven was the only school in the District that held a school bonfire”.

He said with the former peace club members, they were able to print Fambul Tok Ti-shirts that they used as uniforms in most cases to make the club members stood out from the other students.

Mr. Koroma told the pupils that on no account should they be found in odd places and not in class. “It is now your duty to talk to your friend to stop staying behind the toilet while classes are ongoing”, he said. He talked about the criteria used to select them that they were not selected because of their beautiful faces “but because we know you can be an example to your colleagues”.

Borbor Keifa, on the other hand, admonished the pupil to desist from all lawless acts in the school and the communities they live. They should be a role model. “It is now your duty to work with the administration to maintain law and order in the school. Whenever any of your colleagues is doing something contrary to the law and order of the school and the community you live, talk to him to change and if he/she does not listen to your advice take the matter to them as peace coordinators. Fambul Tok also has interest in the free quality education that is why you should be reading to compete with other Fambul Tok school in the District and outside the District”.

Satta Kemoh, a peace champion asked, what will happen if they report a friend who is physically stronger than them and he/she happened to be punished, upon their return to class and bully them in return?

Mr. Keifa said, “not in all cases defaulters are punished, we will counsel them to change and we will not mention your identity them”.

Mr. Mansaray a Fambul Tok District staff attached to Wan Fambul School Clubs Programme discussed a brief history of the peace club initiatives and Fambul Tok’s operation in the District. He talked about their operational areas, chiefdoms, sections, and all the structures they have in those chiefdoms and sections. He again admonished both the peace coordinators and peace champions to believe and own the process.